Futsal is the fastest-growing sport in the UK, an exciting small-sided game of indoor football developed in South America and played by the likes of Messi, Ronaldo and Iniesta.

The game maximizes touches on the ball for all players which ultimately fulfils learning opportunities and development. Futsal is played with a smaller, heavier ball therefore encourages football to be played on the floor at a high tempo.

Come and join the futsal revolution!

Please email us at futsal@kickoffcoaching.com or call us on 07809 289232 for more information or to book onto one of our courses below. 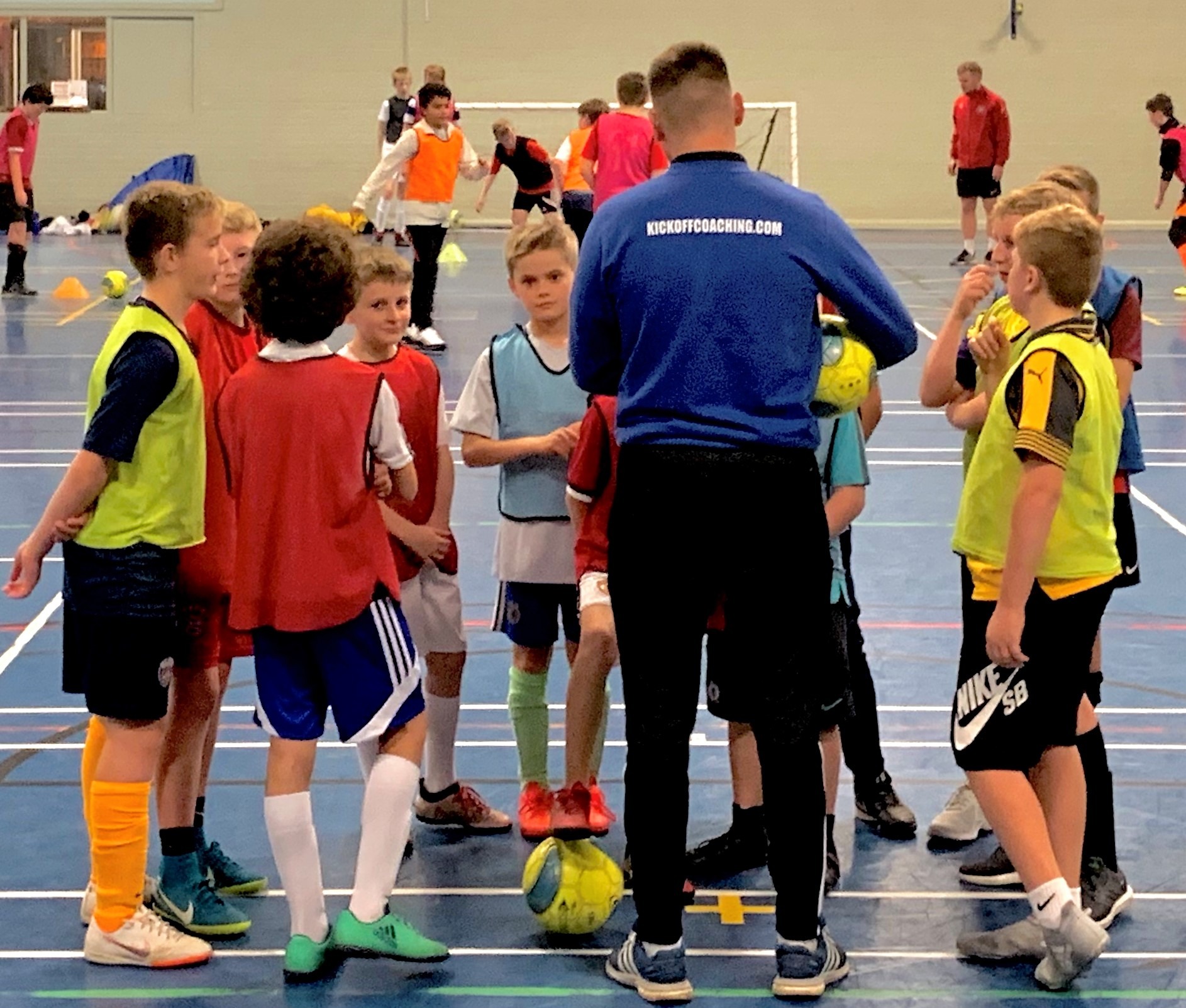 The game maximizes touches on the ball for all players which ultimately fulfils learning opportunities and development. Futsal is played with a smaller, heavier ball therefore encourages football to be played on the floor at a high tempo.

Come and join the futsal revolution!

Please email us at futsal@kickoffcoaching.com or call us on 07809 289232 for more information or to book onto one of our courses below.

Our sessions are in full swing at The Winston Churchill Sports Centre. Sessions run weekly all year round during term time only.

We believe the syllabus we have created is fun, challenging and innovative to enhance the development and progression for all of the players. Each session is capped to maximize learning opportunities and to strengthen the Player to Coach relationship.

Spaces for these sessions are secured on a first come first served basis. Please use the booking button below to secure your place today.

Book onto a futsal course today

The Benefits of Futsal

Futsal is fast-paced and players will touch the ball many more times during a game which means they will practice skills in more situations than in traditional football. Futsal places a large emphasis on technical skills and ability and also encourages players to think quicker when under pressure in tight spaces. The speed of thought process must be quick, therefore will also help improve a player’s decision-making.

Futsal does not compete with 11-a-side football but serves to support it as an excellent opportunity to improve skills and develop football ability whether indoors or translated on the outdoor football pitch. Although if young players can succeed on these skill areas first with a smaller ball, the technical habits will already be in place for when they player with a bigger ball.

The History of Futsal

Many of the worlds top footballers played Futsal and credit it with supporting their football development including Messi, Ronaldo, Zidane, Xavi and Fabregas.

“Futsal was important in helping me to develop my ball control, quick thinking, passing… also for dribbling, balance, concentration…Futsal was very important, no doubt.”Pele, World Cup winner 1958, 1962 and 1970

The origins of Futsal are traced back to Uruguay and Brazil in the 1930’s and called Futebol de salao (translated from the Portuguese as “Hall football”). The sport spread from South America and in 1971 the International Federation for Futebol de Sala (FIFUSA) was officially formed in Brazil. The first FIFUSA world Championships were held in Brazil with the hosts winning and fielding recognised stars from their 11-a-side game that had been brought up playing the sport with the likes of Pele, Rivelino, Falcao and Zico demonstrating their futsal skills.

As the game spread throughout the world FIFA took over as the governing body in 1989changingFutebol de Sala to the officially recognised “Futsal.” Under Fifa’s control new rules were introduced aimed at improving the technical aspects of the game and to develop players of all levels to their potential.

KickOff Coaching offers weekly coaching sessions open to Boys & Girls of all abilities who wish to take advantage of futsal and the benefits is opens up to young players and their development. Each programme delivers a 6 week coaching syllabus, with each week focusing on a different objective for the players to achieve.

Book onto a futsal course today